Fake It 'Till You Make It: Accent Mimicry from an Evolutionary Perspective 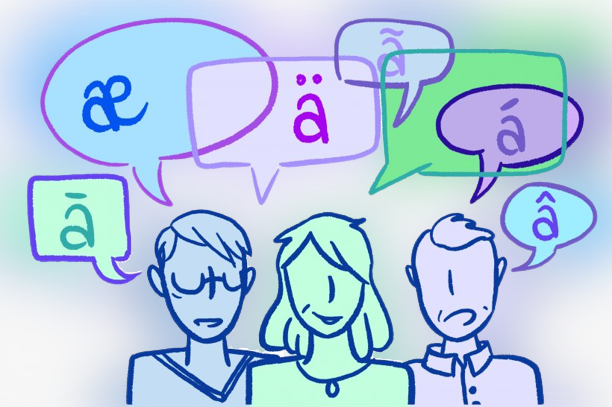 When you think of “Evolution”, your first thoughts might be about apes, Charles Darwin, or changes in the physical features of different species. While the evolution of humans has resulted in distinct physical and biological characteristics, traits have also evolved and changed the way we think, communicate, and socialize. At the intersection of these is how we decide who to cooperate with and who to reject as a member of our group. How do we detect who we can trust, and how is this cognitive decision related to evolution?

Signalling Theory provides a framework for understanding how evolution has played a role in who humans decide to form social relationships with, suggesting that we use a variety of signals to detect who is trustworthy. One such candidate is accent.

What is an accent anyways?

Accents are variations in the way sounds of a given language are pronounced, due to geographical region or the influence of another language. For example, within the UK there are several English accents that differ based on geography - individuals from Essex sound different than those from Bristol, even though they speak the same language. Research has demonstrated the effect of accent on our social decisions today: individuals who speak in a different accent are rated as less trustworthy. It’s possible that throughout the course of our evolutionary history, groups of people from differing regions evolved to sound different, and this in turn allowed individuals to make inferences about whether or not a passer-by was a member of their “group” or not.

Jonathan R. Goodman, a senior PhD candidate at the University of Cambridge, is investigating how accents act as social signals. From an evolutionary perspective, there could be benefits to speaking in a specific accent in specific circumstances.

Jonathan has designed an experiment using Phonic to test this hypothesis.

To test this hypothesis, Jonathan needed to obtain audio recordings of individuals speaking in their natural accent and mimicking different accents (i.e., “faking it”). Typically this would require a trip to the Phonetics Lab, but COVID-19 restrictions limited lab access, and Jonathan needed to shift this line of research to an online-friendly format. That’s when he came across Phonic. Moving the methodology from in-lab to online, Jonathan developed Phonic surveys that were sent to participants to collect speech samples.

“When COVID hit, we thought it was going to de-rail the project. But having a tool like Phonic made a huge difference - it allowed me to pursue my PhD project, and it worked brilliantly!”

A set of 12 sentences were constructed to maximally tease out the differences between 7 UK-based accents: Bristol, Belfast, Dublin, Essex, Glasgow, Northeast England, and Received Pronunciation (a.k.a., “the Queen’s English”). Using Phonic, this sentence set was sent to participants from these 7 geographical regions, and participants were asked to record each sentence both in their natural accent and by mimicking another accent.

These recordings were then sent out to participants who judged whether each was spoken by a natural speaker or a mimic. Participants made ratings only for their native accent; for example, those who spoke in a Bristol accent made judgements on 12 Bristol accented recordings (with half being natural and half mimicked). If accent is a signal used throughout evolution to make social decisions, then participants should be quite good at detecting mimics.

Humans are good at detecting fake accents, but some might be better than others

Overall, participants were able to detect mimics 66.7% of the time. This is well above the at-chance rate (50%), which is what would be expected if participants were responding at random. When broken down by region, the data suggests that participants from the Northern UK and North Ireland may be better at accent mimicry detection, with average rates closer to 70-80%. Although further exploration is needed, Jonathan suspects the higher detection rates may be linked to how multicultural these regions are. These findings would be predicted from an evolutionary point of view: with a greater number of accented groups, there is a higher probability of imposters, and so better detection of fakers would be advantageous.

How does the general population compare with region natives?

The final step in the project is to recruit a large sample from across the world. Jonathan aims to investigate how the ability to detect accent mimicry differs between those who are speakers of the accent, and those who do not belong to these regions. When data collection is complete (~ N=1000), Jonathan and his team will be running a variety of data analyses that will provide greater insight into when people might be better or worse at detecting accent mimicry.

Accent is a strong candidate for Signalling Theory

Jonathan’s data shows that humans are good at detecting accent mimicry, with an average detection rate of 66.7%. But this number also suggests that we’re fairly good at mimicking accents. That is, evolution has selected for both sides of the trait: really good accent mimics, and really good detection of mimics (this is what Evolutionists would call a “Co-Evolutionary Arms Race”). And more interestingly, it’s possible that stronger mimicry detection evolved in regions with exposure to a greater variety of accents.

We may not often think about accents through the lens of Evolution. But, a large body of research suggests that humans demonstrate unconscious biases based on accent. You may have experienced this yourself: making a snap judgement about someone based on the way that they talk. Studying the evolution of accents and the role that they play in human cooperation is an important step towards understanding the accent-based cognitive biases that exist today.

You can download a copy of Accents as honest signals of in-group membership (Goodman et al., 2021), here.