All Around the World: How to Create Multilingual Surveys 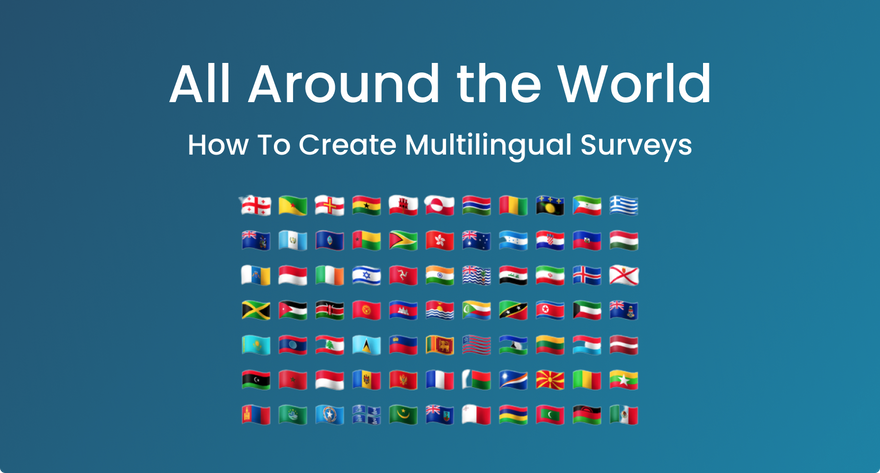 Multilingual surveys let you create a single survey and administer it in multiple languages. These surveys are particularly effective with spoken responses, where allowing people to speak in their native language can engender more authentic, higher quality responses.

Phonic supports a variety of features to make multilingual studies a breeze, including transcribing responses into the spoken dialect and then translating them into a base language for analysis (for ex. English). The original transcription and translated responses can both be viewed alongside each other in your dashboard.

When To Run a Multilingual Survey

Providing participants with multiple language options provides greater accessibility, reduces bias, and lets you use a single link when deploying a study in multiple countries. For example, a feedback survey is administered exclusively in English to a multilingual, multi-ethnic community may introduce bias towards proficient-English speakers. In this case, you may be missing out on important insights from community members who are more proficient in another language. In addition to accessibility and data quality, multilingual surveys are also crucial to some research questions. For example, research with French-English bilinguals requires tools with capabilities in both languages.

Step 1: Build Your Survey in One Language

Start by building your survey in one language. Every survey in Phonic has a default language, which is initially set to English.

If you're only planning to deploy your survey in one language, you can stop here!

The next step is to add question translations. Simply type in your original question, add your translation, and choose which language this translation corresponds to. Repeat this process for each question and each language that you want to administer your survey in.

Survey instructions are the default text that appears on buttons and question types, for example "Record". All of the survey instructions and button labels are already translated into the survey languages show in Step 1 (access these languages in survey settings). If your language of interest isn't one of the several that we provide, you can add custom translations.

Once you've added translations for your questions in each language, you can field your study. The survey will be in entirely distinct languages - even audio and video recordings will be transcribed in the specified language. You can specify the survey language in two ways:

The above image shows two versions of the same survey: one in french and one in English. Which version is loaded depends on the query parameter ?lang.

The final step in any study is analyzing the data. Phonic presents both the original transcriptions as well as the translated versions, which can be toggled in Display Options under "Show English Translations".

And that's it! You now have a survey that is capable of collecting, transcribing, and translating responses in multiple languages.  If you have any questions about how to field a multilingual study, or are curious about other best practices, don't hesitate to reach out to our team!