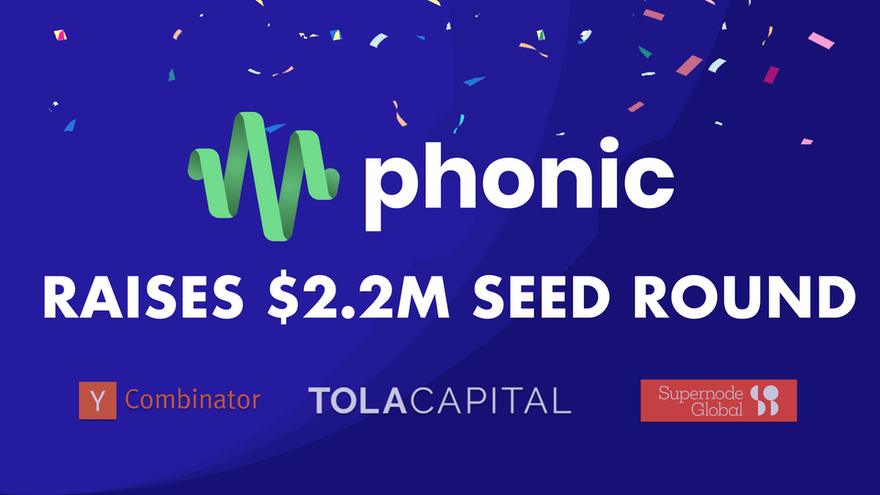 The research startup is delivering the future of feedback with voice and video enabled online surveys along with automated analysis.

Phonic, the voice-centric research platform, announced the launch of its voice and video survey platform and $2.2M seed funding led by Tola Capital, along with Supernode Global, Y Combinator, Zillionize, Remus Capital and others.

Online surveys have been the dominant method of collecting feedback for decades, however they have not evolved in that time, and response rates and quality have suffered as a result. Modern brands have intimate relationships with their customers and desire richer, more nuanced feedback than they can get with traditional surveys. Phonic is betting on voice as the future of feedback. Their platform lets researchers easily collect voice and video survey responses, enabling low-friction, verbalized feedback. This feedback is then transcribed and distilled into actionable and high-value insights with automated analytics. Today Phonic is now publicly available and users can access all previously beta features.

Phonic launched into public beta in late 2020, and is currently used by researchers at more than 250 top universities, including, Stanford, MIT, Harvard, and the University of Toronto. They recently expanded to serve enterprise customers, including brands like Mars and King’s Hawaiian®, and have surpassed one million total responses. The platform accelerates and scales research that was previously conducted in person. Jason Lee, a researcher at a Fortune 50 company, called Phonic “an order of magnitude better insights into customer feedback using audio and video”, adding “Voice and video made it easy to gain significant insights and sentiments - something that typed responses couldn't provide. Phonic replaced the need to conduct time consuming and costly user interviews. It’s a really great way to gain market and product insights without using traditional market survey approaches.”

Phonic was founded by ex-Uber and Google engineers David Ferris and Mitchell Catoen when they discovered survey response quality had been deteriorating for years. The two built a prototype- a way to answer surveys by either typing or speaking- and found striking differences between the written and spoken responses.

“For long responses, voice has the unique benefit over text of being both lower friction and containing tone, and this tonal information is a goldmine. It was clear from listening to actual responses that some users were emphatic in their feedback and others really didn’t care, a distinction impossible to make had the responses been typed. We feel that this style of research is a no-brainer for anyone looking for truly new insights.” says David, co-founder & CEO. Phonic is also breaking ground in voice understanding, building an analytics suite specifically designed to filter and distill insights from thousands of unstructured audio and video clips.

“Phonic is enabling qualitative research at scale to enable richer research across academic and corporate customers. The platform is simultaneously powerful and flexible alike – it's just as easy to create an audio survey poll of your co-workers as it is to launch and scale a video focus group to hundreds of users,” added Akshay Bhushan, Principal at Tola Capital.  “The analytics automatically presented by Phonic on top of the audio and video feedback collection is the cherry on top. We are incredibly excited to support Phonic as they re-invent the multi-billion dollar survey software category.”

The Phonic team plans to use this funding to expand their engineering and go to market teams, invest in their platform, and support a wider variety of research objectives. They plan to take the learnings developed in academia over the past 8 months and deploy them in industry research, and hope that by enabling faster, higher quality feedback, they can become a major ecosystem player.

Founded in 2020, Phonic is on a mission to deliver qualitative insights at quantitative scale.