From Their Perspective: How Teens Use Social Media to Learn 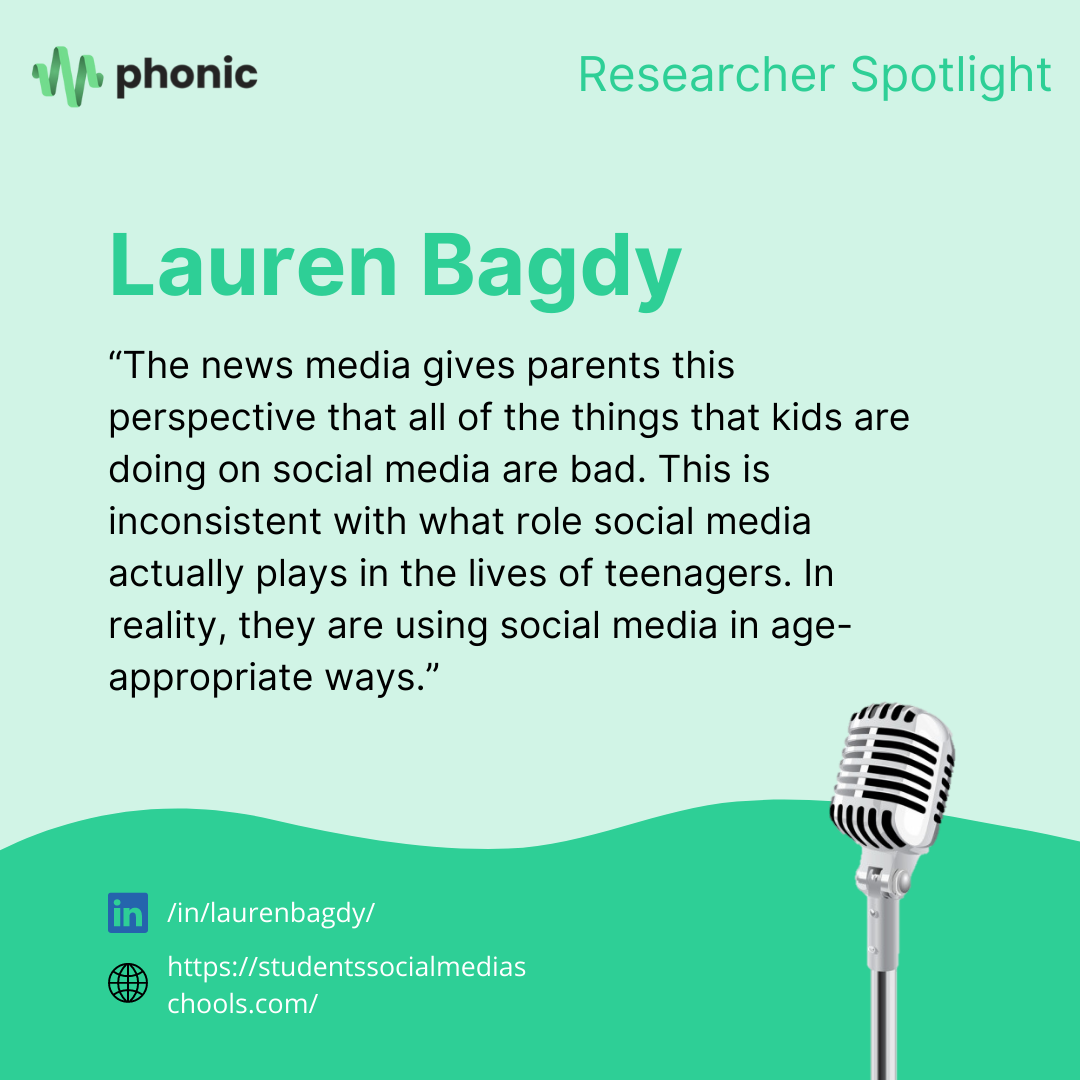 The Students, Social Media & Schools (SSMS) project aims to answer questions like these. The SSMS team is led by Dr. Vanessa Dennen and Dr. Stacey Rutledge, and consists of a handful of graduate students and an army of Florida State undergrads. The project broadly studies “where social media fits in the climate of schools” especially since social media use is typically branded as a “no-no” in school environments. Some of the project’s more recent publications and presentations include findings from social media use over the course of the COVID-19 pandemic and social media use in high schools more generally.

We had the opportunity to sit down with Lauren Bagdy, a PhD candidate whose dissertation is part of this effort to better understand social media’s upside in teen learning.

How Researchers Study Social Media Use In Teens

Lauren’s dissertation focuses on how teenagers are using social media platforms to engage in self-directed informal learning. Informal learning is learning that occurs outside of a structured environment, for example, outside of a classroom. To investigate this topic, nine teenagers who were purposefully engaging in self-directed informal learning, and were aware that they were using social media for this purpose, participated in a diary studies and interviews. These qualitative methods allowed Lauren to understand the naturalistic view of what teens were doing on social media, from their perspective.

“The news media kind of gives parents this perspective that all things that kids are doing on social media are bad. And so it really, I think, gives them an inconsistent view of what role social media plays in the lives of teenagers, when really they are using [social media] in age-appropriate ways”.

Given the study design and population, Lauren was in search of a user-friendly audio recording tool. One of her main concerns was finding a tool that her participants did not need to learn how to use, but she also required something that would seamlessly integrate with her existing Qualtrics survey. When she came across Phonic, Lauren said it was “perfect for what I needed and what I was looking for.”

When it came to nailing down the study design, Lauren opted for an audio recording survey for a few different reasons. “I was just trying to be mindful of the population I was working with… I thought about doing just pure written diaries, but that’s not really a thing for kids anymore. Back when I was in high school everyone had a journal… And [kids] don’t do that anymore. Plus, I didn’t want it to feel like it was an assignment. I wanted them to feel like they were talking to me, and a lot of them did address the diaries in that way - just like we were having a conversation.”

Teens use Social Media to Support their Hobbies

Teenagers are using social media to learn about their hobbies or about new hobbies. In one case, a participant had taken up a hobby and created their own business on social media.

Teens use Social Media to Support their Schoolwork

Most of Lauren’s participants were completing school online at the time of the study, due to COVID-19. Her data suggests that her participants were using social media platforms, such as Youtube, for video tutorials on certain subjects. In some cases, they even turned to Instagram and Tiktok to learn about topics they were learning about in school.

Teens use Social Media to Mobilize for Justice

Finally, the teenagers in Lauren’s study were using social media to mobilize for social justice. Platforms such as Instagram and Tiktok allowed her participants to learn about events that were happening outside of their community, and their associated social justice movements; topics that they may not have otherwise been aware of or understood.

It’s evident from Lauren’s research that teenagers are not always using social media for entertainment (although Lauren says that this isn’t necessarily a “bad” thing either), but also for learning. Rather than set strict rules around social media use, Lauren’s research suggests that schools should embrace social media within their curriculum. One way to do this is to teach more information and digital literacy. For example, students could be taught methods to fact-check what they find on social media to ensure that they are receiving the most accurate information. Lauren also says that maintaining access to social media for teens in lower socioeconomic status (SES) households is important; providing equal opportunities to their higher SES peers to engage in self-directed informal learning. Finally, it is important to train teachers on how to teach and engage their students who are growing up in a world of social media. Lauren’s research suggests that many teachers are still hesitant to implement social media platforms into their teaching practices, further feeding into the notion that social media in schools is forbidden or taboo.

There’s no doubt that using social media in the classroom seems unconventional, but we think it’s time to break the rules and create new conventions - in true teenage fashion.